Monday 25th June 2007: Pouring rain in Sheffield all day, the River Don flowing past the back wall of the Foundry Climbing Centre bursts its banks, flooding large parts of Sheffield including the Foundry car-park to a depth of about 4 feet! Fortunately the floor of the Foundry is several feet higher than the car-park, but it only takes a couple of inches of coverage to soak everything.

To show the scale of the damage and of the cleanup operation, I’ve put together a short piece of video taken from the second day of the cleanup… It’s a bit gritty and dark in places, but that’s reasonably accurate to be honest. 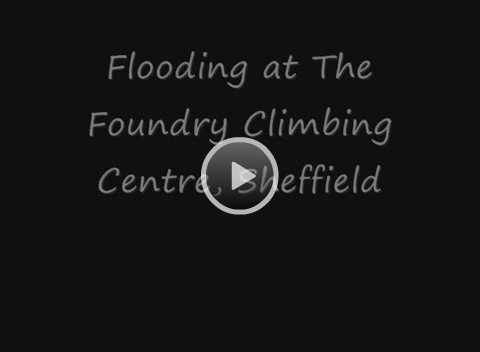 Next time you go to the Foundry, pause for a moment inside the front door and reflect on the high water mark and the photos of the cleanup operation that are shown there… then when you get upstairs thank the guys and girls for mucking in and reopening so fast so everyone can continue to enjoy the climbing.

Just to give you an idea, here’s a ‘Before and After’ montage from the Foundry front door. The ‘before’ image was taken by Tom Briggs at Jagged Globe on Monday evening as the waters were still rising, showing Iain putting some sandbags out. It was all they could do before wading out in 3ft of water when they left at 5pm; the case being ‘get out now or never!’. You can clearly see the ‘high-water’ mark on the construction site boardings in the ‘after’ photo. Sadly, Iain’s sandbags were well overcome; the high tide mark is easily the height of my waist and to just put that into context the office to the right was flooded to a level higher than the desk in it! 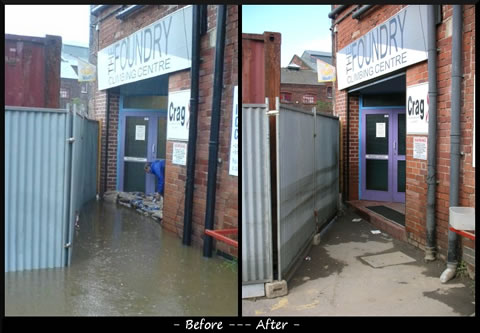 See that red crate on the left? That’s one of those builders’ porta-kabins, you know, the heavy steel things. The flood waters were that strong they shifted it off its mountings and crashed it into the barriers!

I cycled (the only feasible means of travel that morning) down there Tuesday morning and was greeted by 3 inches (!) of mud in the car-park that the river had left behind and an understandably forlorn pair of grubby and distraught looking guys in the shape of Neil and Iain starting the unenviable job of clearing up. Feeling duty-bound to help out but returning home to change into scrubby clothes first, I joined the staff in the clean up for the next two days. It was depressing, backbreaking and a wet and mucky job that ensued for the next two full days until the Foundry reopened its doors to the public 48 hours after the whole centre disappeared under river water.

These images show the main two (and the most knackering) jobs; Lifting up all the square rubber mats and taking them outside to drain; and ripping up the carpets underneath that were totally waterlogged. The shot of the carpets shows the unsubtle hands-on approach needed: corners were OK, only needing two people, but ripping up a whole carpet typically took a minimum of four, and sometimes five people! Mucky water was everywhere so boots, gloves and a jet-washer were the order of the day. 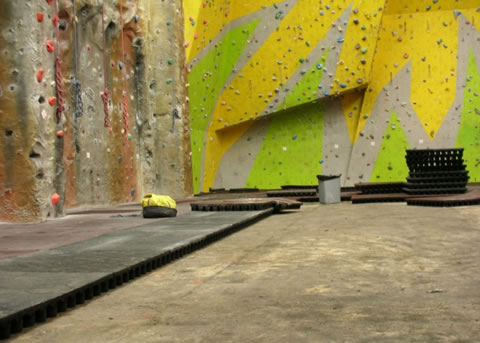 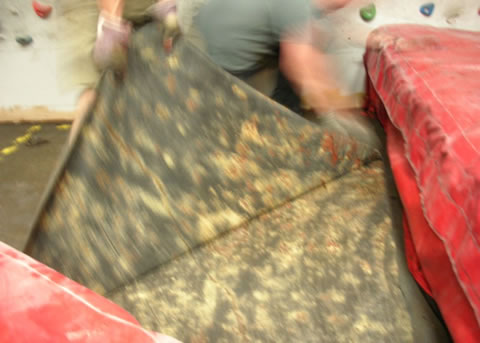 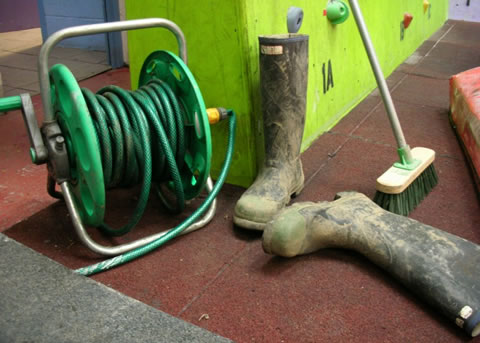 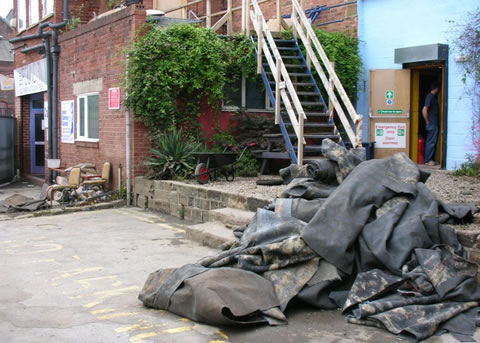 Having moved the rubber mats and ripped up all the carpets, the carpets under the bouldering wall had to go next, meaning those red mats that we’d been dreading moving and hadn’t been moved for years had to go. 8 men to a mat; each one finally shifted in turn. All this stuff is heavy normally, so incredibly heavy when full of water! This photo shows the end of the job on the carpets in the main hall, stuff everywhere as you can see, but a good job done all the same… All that had to happen now was to put everything back and open up (then start on the Furnace and repeat the whole procedure over again…) 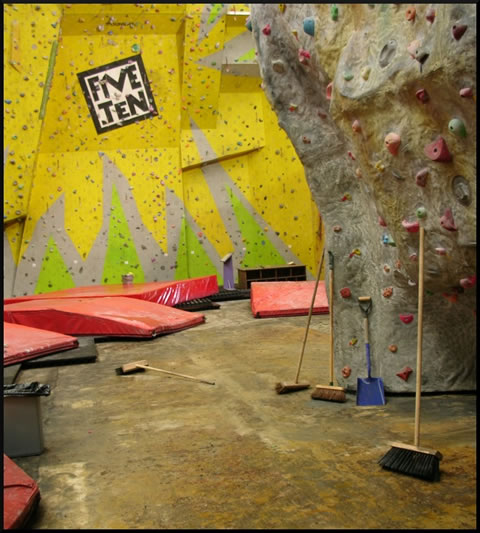