Please note: This article was originally on planetfear.com but has since vanished. Steve wrote the original and thanks to t’internet principle (once published; always there somewhere) via the Wayback Machine, here it is.

Steve McClure reports back from the 2007 planetFear Kalymnos SunRock Holiday and gives an insight into the allure of Kalymnos and coaching.

Being a coach has many perks, but one of the best is getting to spend time with a bunch of great people that you’d never normally meet. All of these become mates, some come back for more punishment and I’ve even gone away with some on a non coaching basis that have become great friends.

This week there was a varied group of 9 people, the only disappointment being that the 10th member, Frances, the star of last year had to drop out at the very last minute. Sarah, Jack and Gary were on the planetFear Kalymnos trip last year and were obviously keen to raise their game even further, and John was with myself and Gaz Parry in Sardinia a few years back. With five repeat customers out of ten I guess we are doing something right – or maybe it’s just such a nice place. We were also joined by climbing couple Ben and Becky, regulars of the Foundry so obviously already crankin’, Justin, also from Sheffield armed with the strength of 10 men and the wit of 20, and Paulo, an Italian based in Oxford. Finally Alan, living in Boulder but originally from Manchester was along to learn something, though since he’d already climbed F8a perhaps he thought he could teach us a thing or two? 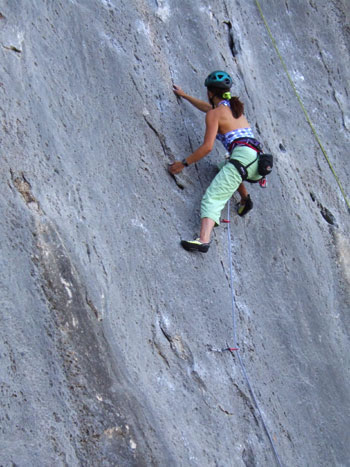 Sarah bagged two hard 6b+ routes in one day. It was her well earned reward that she should be justifiably proud of.

Why do people come back to the Kalymnos SunRock Holiday? Have they not already learned what needs to be learned and will they just be doing the same old stuff on the coaching course? Well, firstly, Kalymnos is pretty unique; it’s a climber’s paradise with incredible routes of all standards over terrain never even dreamt of by most. The food is great, costs are low and eating out every night is the norm. It’s also a quiet life, the hotel has hardly any traffic passing by and the crags are all a short walk away; no cars are needed! But perhaps it’s the weather. In the two weeks there was barely a cloud in the sky. Knowing you can finish your day’s climbing and spend an hour by the pool or snorkelling in the sea, guaranteed, every day, is quite appealing! Also the area is pretty vast and whenever we have people back again we try to mix it up, change venues and offer new challenges both in difficulty and terrain.

So what’s with coaching holidays like these? First of all it’s about having a holiday, this ain’t no school camp; as coaches we are there to teach and help out on any aspects of climbing at any time, but people aren’t forced to climb. The trips are also unique in that there is a bunch of like minded, motivated and super encouraging people all there right behind you, wanting and willing you to do well. If you want to raise your game, this is where it’s at! Everyone has different weak links that need addressing and that’s our job, spotting it, highlighting it and then, hopefully fixing it! 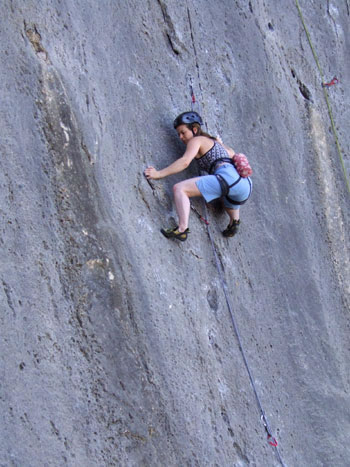 Buy the time Becky had left she’d onsighted 6b+, redpointed 6c and stacked up a pile of other very commendable ascents.

For many people confidence is a real stopping point. This was certainly the case for Becky who had barely led anything before and had requested that we ‘make her brave’. Easier said than done, but by the time she left she’d onsighted 6b+, redpointed 6c and stacked up a pile of other very commendable ascents. Pushing out above the bolts suddenly seemed the norm. Originally she’d been after a ‘eureka moment’ from the course, expecting that the coaches would instantly unlock the secret and suddenly she’d never get scared again. If only that were the case. However, in the space of a week I reckon she did pretty well and so did she. Armed with this there will be plenty more of the same. Sarah and Jack also needed to expand their comfort zone. Sarah needed to concentrate on her flow, moving steadily and decisively. This was also the case last year but there’d been some gains, and this year we bagged the redpointing for her and kept her on-sighting, keeping the movement going, spotting the moves and pushing on without endless indecision. Two hard 6b+ routes in one day was her well earned reward that she should be justifiably proud of. 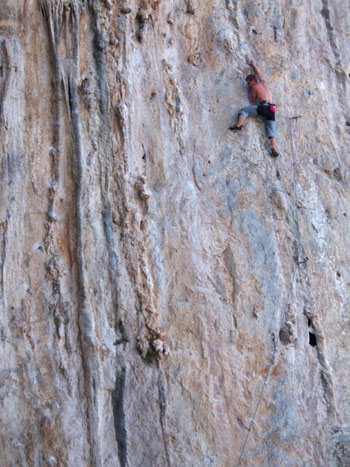 Jack was also struggling with indecision. Living in Holland means it’s an indoor life where footholds are red or blue and in specific places and the size of apples. Here in Kalymnos there are countless options in many places varying from ledges to matchsticks. Jack was simply flummoxed by the options, unsure of what to do to make moves as efficiently as possible. Getting down to some balance and centre of gravity techniques helped a ton, as did the redpointing a classic and 35 metre 6c route. First go up he was sure it would never go, after a little practice he was certain it would be easy, and he was right. 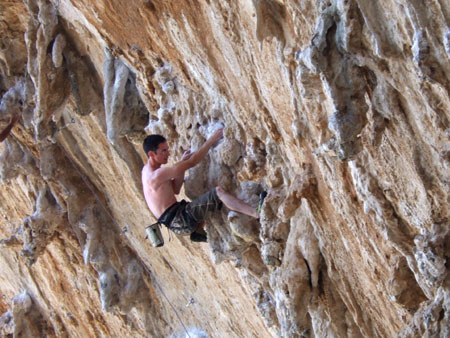 Ben and Alan were obviously the big guns this week. Ben had 12 years indoor experience with steep plastic pulling but barely any outdoor routes to his name and no real foreign climbing at all. A Foundry regular he can be seen cranking out the most severe of problems most days of the week. Alan had already redpointed 8a. Need I say more? This was gonna be interesting. Predictably Ben was amazing on anything overhanging and declared that steep stuff wasn’t even steep till it was over 45 degrees overhanging. An excellent flash of ‘Ivi’, 7b, showed how knee-drops, toe-hooks and knee-bars make all the difference. But this was all too comfortable for him and we dragged him well out of the comfort zone scaring him plenty which was, in his words ‘just what he needed’. He also wins ‘lob of the week’ after utterly fumbling a clip and taking a thirty footer. His week ended well with a redpoint of the ultra classic Sparticus, hard 7b+, done in just a few hours with the minimum of fuss. It looks like his long term goal of 8a is pretty realistic! 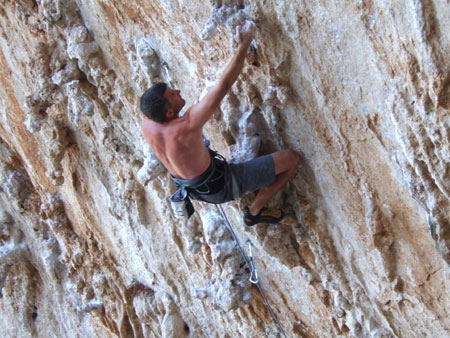 At this level it’s only the slightest of differences that count. However, as a typical rock jock Alan isn’t satisfied with 8a, its 8b or harder that’s the goal.

For Alan this was a tough week, he’s the man on tech fingery walls but this stuff is steep, and all covered in 3D blobs where you can turn the easiest route into a complicated nightmare. It was what he needed, eking out a little extra performance from his already excellent performances by getting to grips with keeping his hips into the wall. At this level it’s only the slightest of differences that count. However, as a typical rock jock Al isn’t satisfied with 8a, its 8b or harder that’s the goal. For this he needs a good kick up the ass and a tweak in the tenacity. Hopefully we gave him this, watch this space… 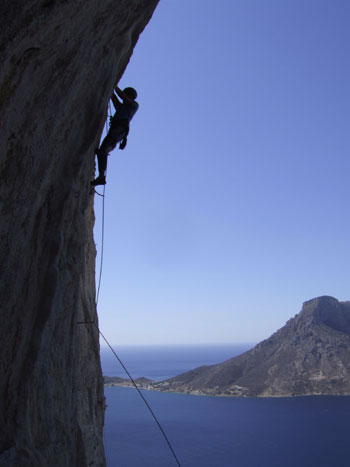 Having never taken a fall anywhere, ever, after a few hours Justin he’d already taken a lob and there was a few more to come…

Not only did Justin provide us with much amusement round the table but he was also good to watch on the rock. Having never taken a fall anywhere, ever, and getting easily gripped above protection he was determined to get to grips with moving between bolts. After a few hours he’d already taken a lob and there was a few more to come. Now Justin is a big guy, big as in strong like lifting heavy stuff. For him it has to come from the feet, which at first it wasn’t! By the last day though he was huffing and puffing way out there on the crux of a 6b+ keeping those feet moving smoothly. Impressive stuff. 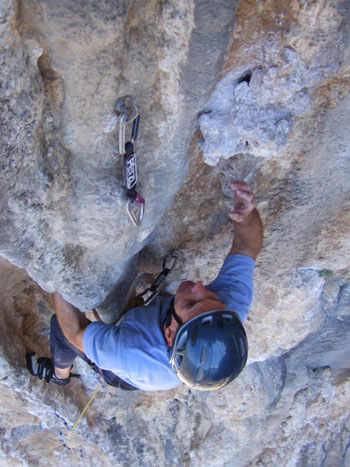 This year Gary was comfortably on-sighting 6c and even 6c+. We stuck him on a 7b project to redpoint - despatched in style!

Gary and Paulo had been onsighting in style all week, taking all the advice on board and climbing like pros. Gary seems to improve year on year despite also spending the majority of his time indoors. Gary first joined me on a planet fear trip to Sardinia back in 2004. Then he barely managed a very basic and juggy 6b after days of effort. This year he was comfortably on-sighting 6c and even 6c+. We stuck him on a 7b project to redpoint - despatched in style! Not a bad improvement curve and I reckon there is plenty more to come! 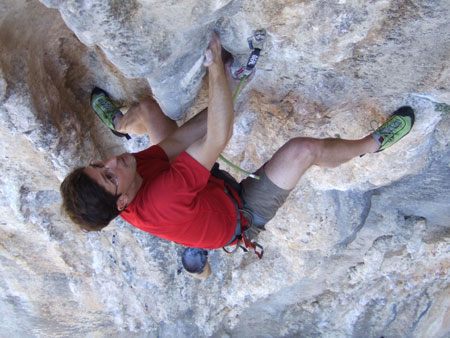 Paulo had expected to climb the odd 6b or maybe 6b+ this trip but went home with 6c+ on-sight and 7b redpoint!

The highlight of the trip was watching Paulo’s effortless movement skills, a truly gifted climber and all round nice guy who up to now seemed to have no idea of his abilities. What can you teach a guy like that? For him it’s all in the mind, confidence in pushing on when things get tough, tenacity to give it everything when the fingers are uncurling and moving fluidly when ‘the fear’ kicks in. He’d expected to climb the odd 6b or maybe 6b+ this trip but went home with 6c+ on-sight and 7b redpoint in an hour, as well as the knowledge that if he wants it, 8a could be his. Now there’s a prize worth fighting for. Watch out for the nice Italian guy with flawless footwork.